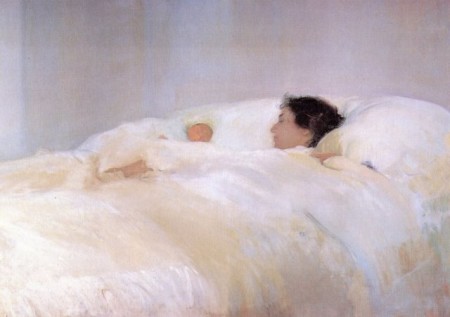 “Mother” by Joaquín Sorolla (1895), is a portrait of the artist’s wife Clotilde, lying in bed with their newborn baby. In addition to depicting a universal experience, it is a masterpiece of white-on-white painting.

Last night a friend messaged me that she was seriously ill. She’s at that age when women get breast cancer, so that’s what I feared. No such luck; she has a primary brain tumor.

I can tell you all the ways she is special: she’s a PhD scientist, a mother, a professor, a wife, a church lady and a compassionate person. She’s brilliant. She’s kind. She’s witty. She knows her pigments. But none of that really matters. Everyone facing a serious illness is special to someone. Often that’s in ways that we can’t even put into words. “I love him so much,” we say helplessly.

In other words, this is horrifying and personal, but it’s also a universal experience. There are many of these in life: the birth of a child, being gravely ill ourselves, falling in love, losing a parent. All of them happen to the vast majority of us, but when it is our time, we feel it personally. We don’t much care that these are universal experiences.

In the cases of loss and fear, we ask: Why, God? I have another friend who frequently drinks until he is howling at the Old Norse Gods. He’s a good egg, but clearly he has no great respect for his own brain. Why her and not him? 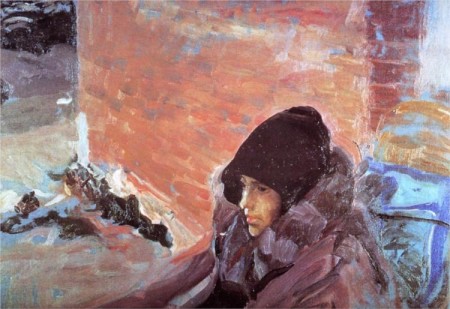 “Maria Sick,” by Joaquín Sorolla (1907), is a portrait of the artist’s eldest daughter recuperating from a serious illness in the mountains outside of Madrid.

The Bible makes it clear that it is not God who wields the cudgel of mortality, but Satan. “[H]e too shared in their humanity so that by his death he might break the power of him who holds the power of death—that is, the devil—and free those who all their lives were held in slavery by their fear of death.” (Hebrews 2:14-15)

When I had cancer the first time, I still believed that all things happen for a reason. I asked my pastor, “What do you think God is trying to tell me?”

“S–t happens,” he sighed. Much of what happens to us happens simply because we are mortal and fallible. God doesn’t generally steer us with a stick. That’s the job of the Father of Lies.

So I’ll bypass that and move to what I understand better. As you set out through the labyrinth of cancer treatment, my friend, I’m with you in prayer.