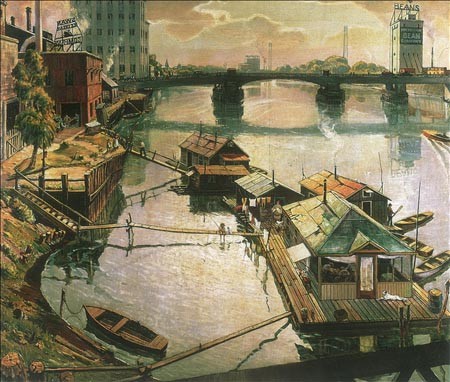 Robert Clunie was a California realist plein air painter. If he’d never painted anything but the High Sierra, he wouldn’t interest me overmuch. This is even though his work is fresh and colorful, and his draftsmanship on high peaks, boulders and cliffs is perfect. However, I recently saw two paintings by him of the Saginaw River that are very different from his western oeuvre.

Born in Renfrewshire, Scotland, Clunie was a self-taught artist. By the time he immigrated to the United States at the age of sixteen, he was already a competent watercolorist. He and his brother arrived in 1911; his parents followed shortly thereafter. 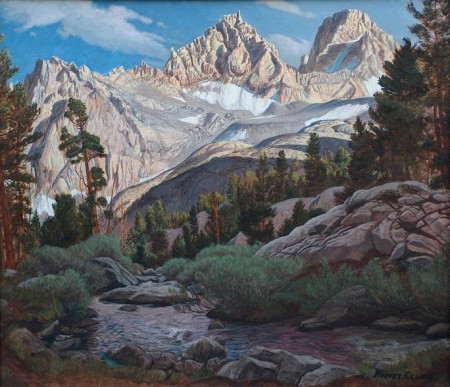 In Saginaw, Michigan, Clunie found factory work pin-striping grain harvesters. A trip to California in 1918 convinced him that he had found his Shangri-La at last. He packed his brushes and headed west. There he had a promising start, working as a set painter for what would eventually become MGM Studios and in the art room of the American Beet Sugar Company.

His mother’s death in 1920 drew him and his wife back to Saginaw. It was there that he first started painting on canvases.

Saginaw didn’t last long. The couple returned to California, where Clunie went into business as a house painter, sign letterer, faux-finisher, and applier of gold leaf. By 1927, he was working almost exclusively as a plein air painter. His paintings were met with critical acclaim, but his gallery sales were interrupted by the Great Depression. 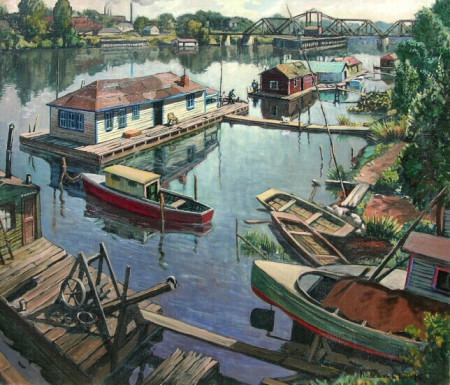 His mountain landscapes are well-executed and numerous. But in February, 1937, Clunie won first prize in the Academy of Western Painters Exhibition for a different sort of painting, his Saginaw River. The painting went on to win third prize at the California Exposition and State Fair in 1938. It is one of two renditions of the same subject.

Saginaw in these paintings looks much like the Buffalo of my childhood, and probably like much of the Rust Belt as a whole: the railroad bridge, the smokestacks, the grain elevators, the wooden wharves, the old boats. The Niagara River is much cleaned up since then (as I imagine Saginaw’s waterfront is, too). It is a breath of pure nostalgia to study these paintings. I have no idea why Clunie was moved to paint them, but perhaps he too yearned for something from his youth.