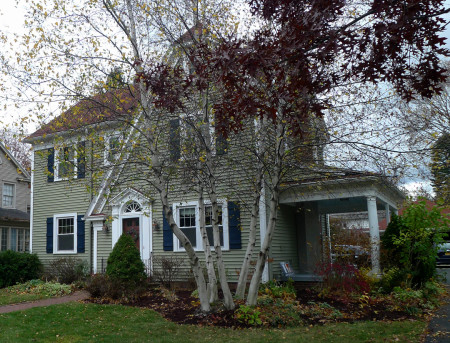 The outside of our house is pretty thoroughly buttoned up and ready for the market.

There are some items which are very useful but which you can’t pass along to thrift stores—cedar shakes, Tyvek house wrap, steel shelving, etc. I could pack some of this up and take it to Habitat for Humanity’s ReStore, but frankly, I like the informal recycling system in our neighborhood better.

Our trash day is Monday. On the weekend, recyclers start cruising the Duchy looking for specific things. They may seek furniture, they may be looking for metal, they may want small engines. They’re extremely efficient at sorting and choosing, they’re generally neat, and they cut down on the waste stream more effectively than our single-stream recycling.

People stop all day and even after dark to check for treasures.

Consider the life cycle of a set of pharmacy shelves from a defunct hospital in Sodus. These were almost new when the hospital was closed. I bought them for $40 on Ebay. I dismantled them at the site, loaded them in my minivan and reassembled them at my studio, which was then in the Hungerford.  Two studios later, they were redeployed in my garage and basement, with some of them being rebuilt into a rack for firewood. They’re very heavy, and I don’t have room for them in Maine. Today they went on the curb, and were snapped up immediately. From here they will go to the scrap yard in Macedon, NY, to be converted into currency. (I know this, because I talked to the scrap-picker.)

The view from my bedroom window this morning. I’ll tidy it up before the trash guys get here.

Blessing strangers with your unnecessary stuff is a great feeling. Today a contractor took a half box of roofing nails. A young couple took some old Christmas decorations.

Of course, this is a completely black-market economy. No CEO of a non-profit is going to skim a big salary off those items. No IRS auditor is going to peer over her glasses and demand, “do you have the original receipt for these wrought iron window boxes so we can determine their fair market value?” (Both jobs exist because of our tax code, of course.)

Life, you know, is really too short to itemize your donated underwear.