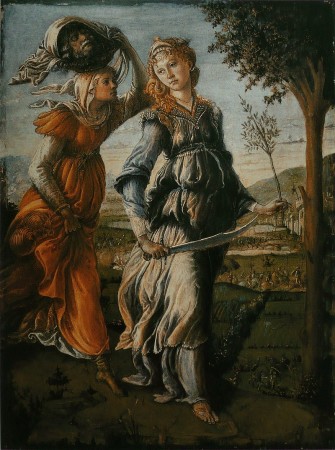 “The Return of Judith to Bethulia,” 1470, by Sandro Botticelli.

The beheading of Holofernes by Judith was one of the most popular Biblical subjects of classical painting. The Book of Judith is minor. Why did it interest artists so much?

The story starts off with the Israelites cowering before the overwhelming force of the Assyrians. Her countrymen’s cowardice upsets Judith, a beautiful and resourceful widow. Judith goes to the camp of the Assyrian commander, Holofernes, and seduces him. As he lies in a drunken stupor, she decapitates him. The enemies disperse and Israel is saved. 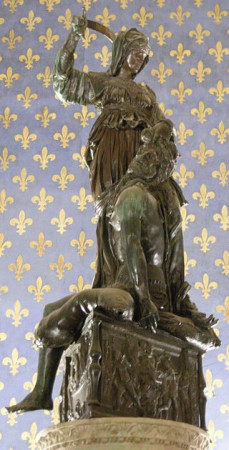 Donatello’s “Judith and Holofernes” (1460) was commissioned by Cosimo de’ Medici as a depiction of a tyrant slayers. It’s one of the few successful political interpretations of the subject.

This is similar to a story from the Book of Judges. The prophet Deborah agreed to accompany the pusillanimous Barak into battle against their oppressors, the Canaanites, but prophesized that the glory of victory would go to a woman. When the Canaanite commander fled the battlefield Jael gave him milk and refuge in her tent. He fell asleep, whereupon Jael drove a tent peg through his skull.

The rise in images of Judith and Holofernes was part of a Medieval and Renaissance genre called Weibermacht or “Power of Women.” It was more of a pictorial conversation about gender roles than either a feminist or anti-feminist statement. In addition to Judith and Jael, popular Biblical subjects were Salome with the head of John the Baptist, Bathsheba, and Susannah and the Elders. 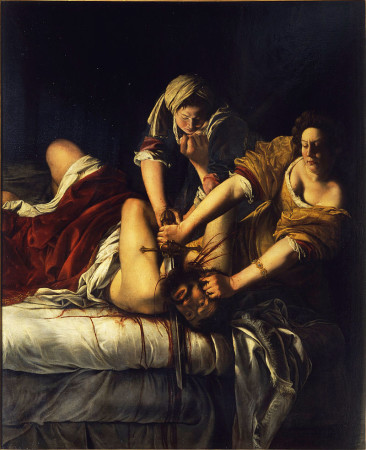 Queen Esther was conspicuously absent, as was the prophet Deborah. While both were heroic, neither operated outside the social order. The Biblical heroines beloved of painters have been the ones who used their femininity, rather than their station in life, to defeat their victims.

In general, artists showed Judith either hacking off Holofernes’ head or holding it aloft in the style of David brandishing Goliath’s head. Judith is frequently shown with her maid; that’s to differentiate between her and Salome.

Judith started off as Madonna figure—chaste after her one heroic sacrifice. However, by the 16th century, she began to slip from grace: she started showing a bit of leg, and was even depicted nude. The Baroque Judith was actively violent, in keeping with the age of Caravaggio and Rubens.

Artemisia Gentileschi is the most famous woman artist to paint the subject. Her Judith is muscular, strong and determined, and Gentileschi doesn’t shrink from the violence of the subject.