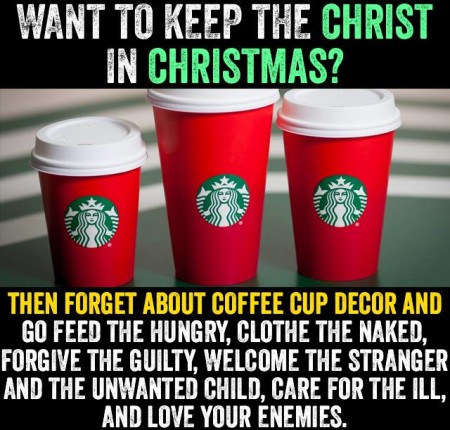 My newsfeed has overflowed with the Red Cup Controversy. What irritated me most about it was how many professing Christians accepted the idea that some Christians—other Christians—had their priorities screwed up. One thing we seem really good at is excoriating the church as a whole for its (perceived) faults. This is, ironically, the very self-righteousness that the Bible cautions us against, althought it masquerades as humility.

As St. Paul might have said (if I had been his scribe), “Grow a pair, people.”

The Red Cup Controversy turned out to be a stupid and transparent hoax. If people stopped and thought for two seconds, they’d have realized that nobody they know talks about Starbucks’ cups. Ever.

Still, that was yesterday’s news. No harm, no foul, right?

The world press would like to categorize American Christians as stupid, spoiled, overly-sensitive brats. Anti-Christian memes feed that idea. They’re a subtle form of prejudice, like saying that six Jewish companies control 96% of the world’s media or asking a black woman how she got her job. In themselves, they’re unimportant, but they are part of a pattern of rising anti-Christian sentiment. Throw enough mud and some sticks.

I have an Israeli friend who is fond of saying that Americans don’t understand persecution. To some degree, she’s right. Applying commercial rules differently for Christian bakers and Muslim truck drivers is not the same as Kristallnacht. Being denied advancement because you’re female is not the same as being stoned to death. That doesn’t make those American examples any less painful for the people involved. 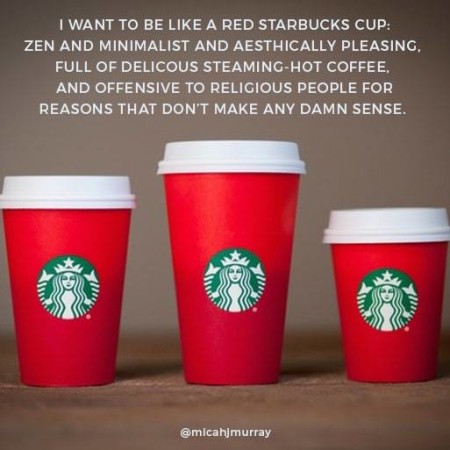 Christian martyrdom is happening worldwide at levels not seen since the early church. We live in an age of authoritarian governments who dislike non-conformist religions because they’re not easily controlled. These states lack any meaningful belief in basic human rights. The collision between them and Christianity has been violent and stunning.

So how does the western Church respond? Some are on top of it with prayer and assistance. Others fold before unwarranted criticism with self-criticism, eroding a rock on which the persecuted church might lean.

Get over it, Christendom. We are supposed to be a light unto the world, not self-loathing mental cases.