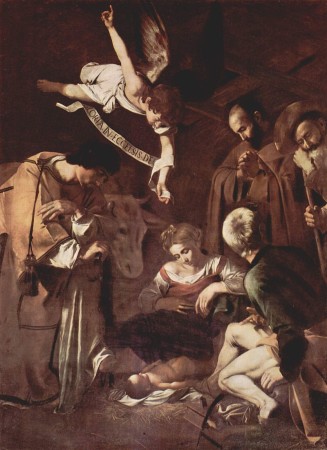 On October 18, 1969, two unidentified thieves entered the Oratory of San Lorenzo in Palermo, Sicily, armed with knives. They used these to cut away the great altar painting, which measured an astonishing 106 in × 78 in. The church was then systematically pillaged of all its art, including the inlaid choir stalls and benches.

That painting was Caravaggio’s Nativity with St. Francis and St. Lawrence (The Adoration), c. 1600-1609, and its theft is one of the art world’s great unsolved mysteries. Rumors of its subsequent destruction abound: it was used by a mobster as a doormat, it was destroyed in an earthquake, or it was wrecked by rats and pigs while hidden in a farm outbuilding. More likely, it’s in a private collector’s vault somewhere, lost to the world just as completely as if it had been destroyed. 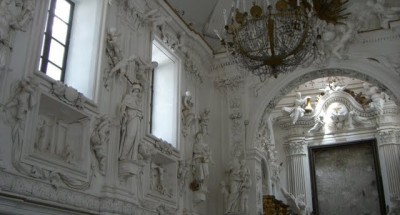 The empty gap in the Oratory where the painting once hung.

A British artist, Adam Lowe, recently led a team effort to reproduce the masterpiece. The project took five months. Lowe is the director of Factum Arte digital restoration laboratory, which specializes in painting restoration. The team worked from a single color photograph and a series of black-and-white glass plate negatives dating from the painting’s last restoration in 1951. Their work relies heavily on digital enhancements and recreations, and they built a detailed digital image of the original before they ever touched brush to canvas.

They matched the pigments to those used in other Caravaggio masterworks and replicated the original brushstrokes. But it is not a perfect restoration—that would be impossible. “We used our knowledge of the paintings in Rome to paint in the missing elements, in the character and style of Caravaggio,” Mr. Lowe told the Telegraph. 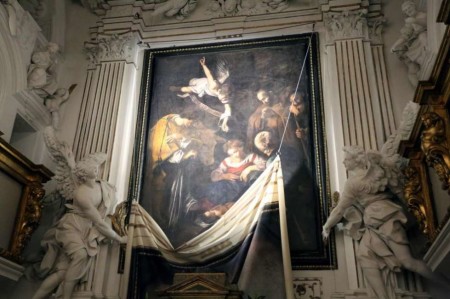 When masterpieces are commodities worth staggering sums, they become tempting targets for criminals. There’s nothing we can do about that. But through the work of a team of honest forgers, a fair copy of the original was returned home.