“Vision after the Sermon (Jacob Wrestling with the Angel),” 1888, Paul Gauguin

Yesterday, I saw an image of Paul Gauguin’s Vision after the Sermon (Jacob Wrestling with the Angel) on Facebook. It occurred to me that it is odd that an avant-garde painter of his time and place would paint religious subjects at all. Yet he did several of them, and none of them have any whiff of cynicism or doubt in them. 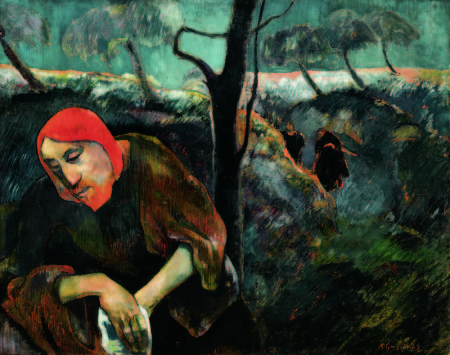 Gauguin was not a trained theologian, nor was he what we would call a conventional Christian. However, his religious belief went beyond the anti-clericism of the circles in which he ran. He was a part of the 19th century Theosophy movement, which would later influence a generation of painters through the efforts of Madame Helena Blavatsky.

The rise in Theosophy in the 19th century was triggered by a general interest in the East and its religions. It attempted to be a synthesis of all faiths, with an emphasis on pantheistic evolution and reincarnation. 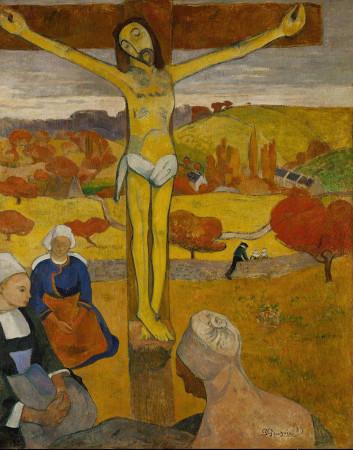 Gauguin was influenced by a French writer named Edouard Schuré. In Les Grands Initiés, Schuré tied Krishna, Buddha. Zoroaster, Hermes, Moses, Pythagoras, and Jesus together into one neat package. Gauguin was introduced to Schuré’s ideas by a fellow painter in 1888. That was the year he painted the four overtly Christian paintings reproduced here. From that we can at least conclude that they are personal explorations. 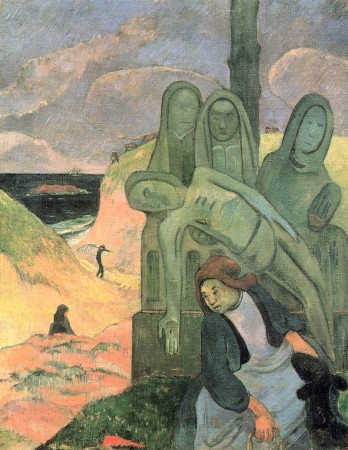 Gauguin also liked the novel Séraphita, by Honoré de Balzac. I’ve never read it, but an art historian friend sent me this quote:

Do for God what you do for your ambitious projects, what you do in consecrating yourself to Art, what you have done when you loved a human creature or sought some secret of human science. Is not God the whole of science, the all of love, the source of poetry? Surely His riches are worthy of being coveted! His treasure is inexhaustible, His poem infinite, His love immutable, His science sure and darkened by no mysteries. Be anxious for nothing, He will give you all. Yes, in His heart are treasures with which the petty joys you lose on earth are not to be compared.