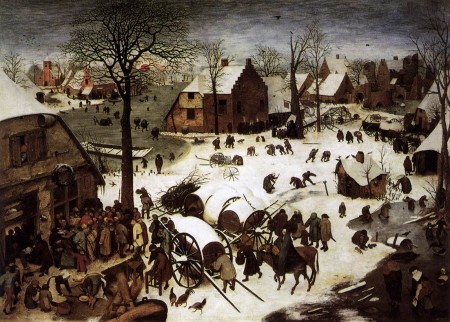 “The Census at Bethlehem,” 1566, by Pieter Bruegel the Elder. If this looks a little cold even for December in Antwerp, bear in mind that he was painting at the beginning of the Little Ice Age.

In those days Caesar Augustus issued a decree that a census should be taken of the entire Roman world. (This was the first census that took place while Quirinius was governor of Syria.) And everyone went to their own town to register.

So Joseph also went up from the town of Nazareth in Galilee to Judea, to Bethlehem the town of David, because he belonged to the house and line of David. He went there to register with Mary, who was pledged to be married to him and was expecting a child…” (Luke 2:1-5) 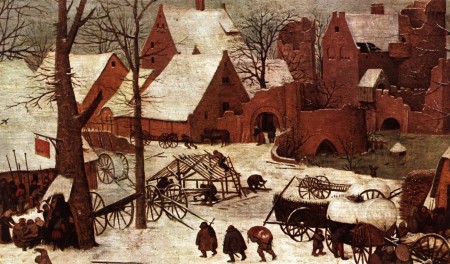 The ruined castle in the far distance of Bruegel’s painting was based on the towers and gates of Amsterdam.

The Jewish writer Titus Flavius Josephus recorded that Quirinius (Cyrenius), Legate of Syria, and Coponius, Prefect of Iudaea, were assigned to do a tax census of their respective provinces for the Empire in 6-7 CE:

Now Cyrenius, a Roman senator, and one who had gone through other magistracies, and had passed through them till he had been consul, and one who, on other accounts, was of great dignity, came at this time into Syria, with a few others, being sent by Caesar to be a judge of that nation, and to take an account of their substance. Coponius also, a man of the equestrian order, was sent together with him, to have the supreme power over the Jews. Moreover, Cyrenius came himself into Judea, which was now added to the province of Syria, to take an account of their substance, and to dispose of Archelaus’s money…

Chaos at the government office… the more things change, the more they stay the same.

In the Roman Empire, the natives were frequently revolting. Censuses—with the inevitable taxes that followed—caused rebellion from Gaul to Pannonia to Cappadocia. In Judea one Judas of Galilee led a violent resistance. His group, which Josephus labelled “The Zealots,” preached that God alone was the leader of Israel and urged a tax rebellion against Rome.

Citizen and provincial censuses were conducted differently, but that sacrificial bull at the right in the Census Frieze from Altar of Domitius Ahenobarbus (2nd century BC) might give some clue as to why the Jews found the practice so annoying.

In 2 Samuel 24, the young King David decided to take a census of his people over the objection of his general, Joab. God was clearly angered by this, but why? The answer may lie in David’s need to number his own strength instead of relying on God. However, a census is often a tool of a totalitarian government, as was certainly true with the Romans. 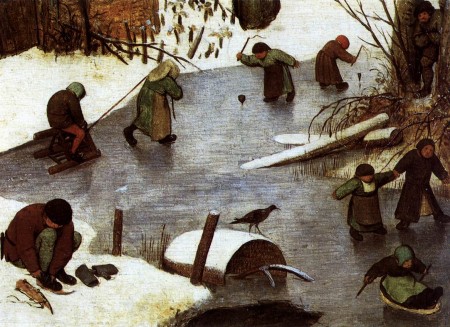 Bruegel painted the actors as his friends and contemporaries, underscoring the universality of the story. But to us, the Flemish Renaissance peasant seems as strange and marvelous as would Biblical-era Bethlehem.

The genealogies in Luke and Matthew are meant to spell out the Jesus’ legitimacy for the throne of David on both sides of his family. That is reinforced in the passage above, which also brings us (and the Holy Family) back to Micah 5:

But you, Bethlehem Ephrathah,
though you are small among the clans of Judah,
out of you will come for me
one who will be ruler over Israel,
whose origins are from of old,
from ancient times. 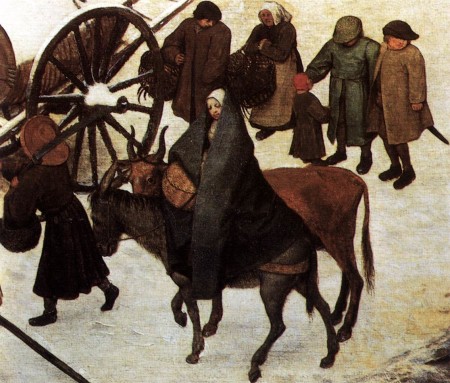 Bruegel hid the main actors in his play in plain sight. Now that I’ve shown you the Holy Family, you can find them in the painting.

When it comes to artistic representations of the Holy Family’s arrival at Bethlehem, one painting stands above all others: Pieter Bruegel the Elder’s Census at Bethlehem, 1566. As always, Bruegel hid the main figures of the play in plain sight. He subsumed them in the greater action of life, neatly reflecting that the drama at Bethlehem concerned an unknown family at the farthest outposts of the Empire. The players were not exotic; they were the faces of his friends and neighbors. 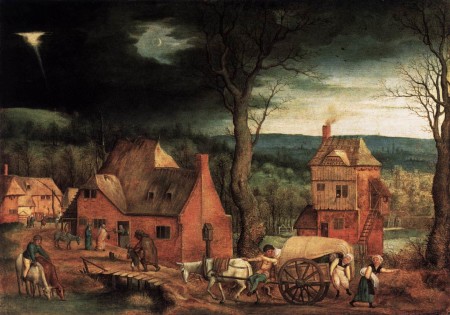