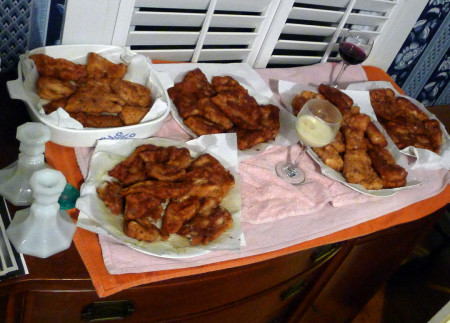 Our presentation wasn’t up to snuff but the codfish was perfect as always.

I got back from returning the Penske truck at 4 PM on Christmas Eve. That gave me exactly, well, zero time to prepare dinner, but luckily I have adult children who stepped into the breach. (Let’s be honest; they cook better than me anyway.) My job was to find dishes and a table surface on which we could eat. That meant unloading boxes until I found the pad for our dining room table.

Almost everything in my china cabinet came to me from someone I once loved who is now dead. The hard work of the past days, the holiday itself, and the overwhelming task of unpacking combined to make me almost teary as I replaced these items on their shelves. 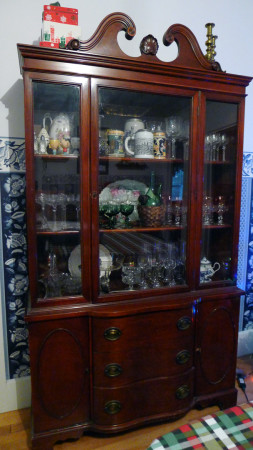 I never found the table pad, but the china cabinet got refilled.

I never did find the table pad, so we used flattened packing boxes. The codfish—cooked under the capable supervision of my daughter Laura—was perfect as usual. The babies were adorable in their Christmas jammies. And that’s what Christmas is about. 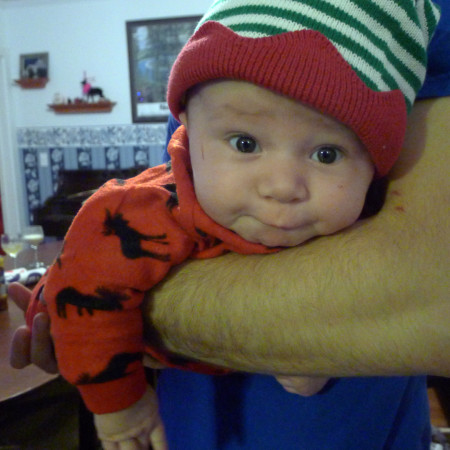 Family is the reason for the season, actually.

For many decades, my extended family gathered in South Buffalo on Christmas Eve. The centerpiece of our dinners was baccalà, or salt cod. My aunt would go to the market and buy huge slabs of cod, which she would place in a fresh-water bath, changing the water a couple times a day, until the pieces were soft and plump and ready to fry. Because salt cod stinks when it’s fried, she would do the last phases outdoors.

And she got sick of it. “Nobody likes it,” the collective aunts insisted, which was patently untrue. So I volunteered to take over the job. The first year, I did it as I’d learned at my grandmother’s knee. It wasn’t as much fun with wee skinny modern salted cod, and they never reconstituted as nicely as the behemoths of my youth.

My ancestors used salted cod not by choice but because there wasn’t refrigeration in the mountainous part of Catanzaro from which they came. Fresh ocean fish would have been out of the question for a railroad worker in Buffalo, NY in the early 19th century. I swapped it back for the fresh, and my uncles didn’t seem to mind.

This is how we’ve been doing it ever since:

Buy a nice fat piece of fresh Atlantic cod. Cut it into pieces the size of playing cards. Dry them off slightly so they accept the batter.

(Scale the amounts of this to the amount of fish you’re cooking. Three eggs will probably do a normal family dinner’s fish.)

Heat a frying pan with about 3/8” of your favorite vegetable oil until a water droplet explodes when dropped into it, but before it starts smoking. Dip the fish pieces in each bowl so they are first coated in flour, then coated in egg, and then coated in bread crumbs. Fry on both sides until golden brown, then set on paper towels to drain the grease.

In theory, you need a half pound of cod for each person, but that doesn’t take Christmas breakfast into account.

Life is short and fried cod is too good to have only on holidays, so make it early and often.