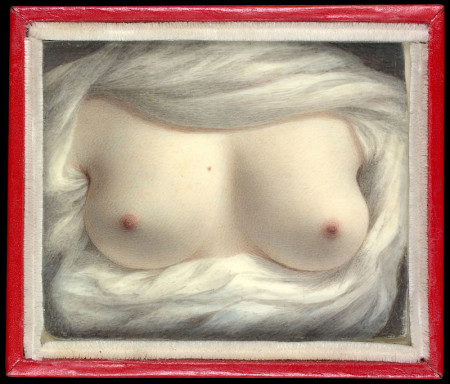 Sarah Goodridge was a prolific Boston-based portrait miniature painter. She was successful enough to be able to afford a house on Beacon Hill and to support her invalid mother and orphaned niece. Nor was she forced to be an itinerant, as so many early 19th century American painters were.

Miniatures are a fascinating subset of portrait painting. The first portrait miniatures were painted by displaced manuscript illuminators in the 15th century, at a time when their main art form was being displaced by printing technology. Miniatures might be carried, worn on a chain or kept in a bedside drawer, but they were not made to be displayed on walls. They were emotional mementos, similar to the photos our parents’ generation carried in wallets and we carry around on our cellphones. For this reason, perhaps, there have always been successful women painters of miniatures. 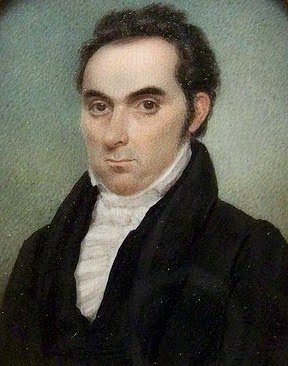 “Daniel Webster,” 1825 portrait miniature by Sarah Goodridge. He was 43 and a member of the House of Representatives for Massachusetts when she painted this.

Sarah Goodridge studied under Gilbert Stuart, who praised her portrait of him as the “only true likeness” of himself. He liked it enough to give it to his mother in a bracelet made of his and his wife’s hair. Goodridge’s miniatures were painted with watercolor on slivers of ivory that she had sanded and treated with gum arabic as a ground. This gave her great delicacy, precision, and above all, luminance.

As was the case with many professional women of her time, she never married. But that didn’t mean she never loved. One of Goodridge’s most dedicated customers was the great 19th century politician and orator, Daniel Webster.  They probably met in 1819, when Stuart was painting Webster’s portrait. At that time, Goodridge received the first of many commissions from Webster, to paint his daughter Julia.

Forty-four of his letters to her are still extant, written between 1827 and the year before his death. She painted him more than a dozen times, and painted his children and grandchildren. She loaned him money that he never repaid. And she visited him alone in Washington twice. The first visit, in 1828, was immediately after his first wife’s death.

That was also the year in which she painted Beauty Revealed. Goodridge was 40 years old at the time, and the breasts she painted were doubtlessly real and individual. One is slightly larger than the other; there is a mole and the faintest suggestion of downy hair and goosebumps. The areolae are not darkened from pregnancy and breastfeeding. 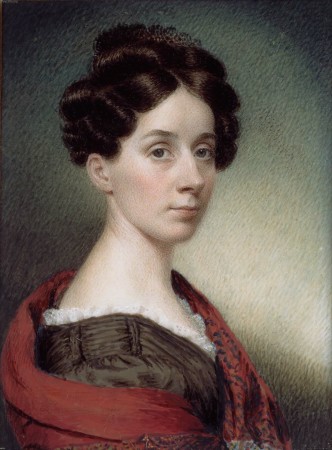 1830 self-portrait miniature by Sarah Goodridge. At 42, she had an interesting, lively, intelligent face.

Given the times, it’s safe to assume she used herself as a model, and gave this miniature to Webster as a very personal gift.

Webster ultimately remarried, and not to his long-term artist inamorata. Others can speculate as to why that was. What interests me most is that Webster’s widow and children felt no need to edit the miniature out of his possessions after his death. Their official position was that the couple had once been engaged, although no other evidence of this exists. Beauty Revealed and another self-portrait by Goodridge were kept in the family until 1991, when they eventually made their way to the Metropolitan Museum of Art in New York.