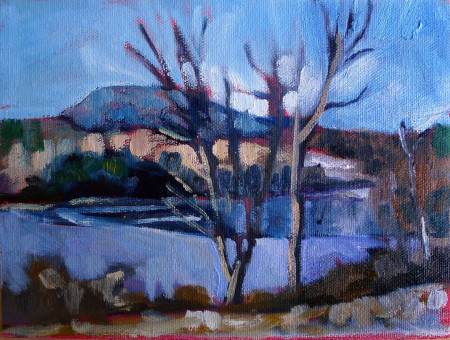 Imagine the housewife in, say, 1910, making her morning coffee. She comes down the back stairs to empty the ashes from the woodstove and stir what coals are left. After coaxing the embers into life, she might hazard the inside pump, or, if she is a fatalist, she just goes for the jug of water she’s saved against a freeze. Setting up the pot will be quick work, but she will then have wait until the stove reaches temperature and the water comes to a boil. Geesh. I can run to McDonalds in less time than that. 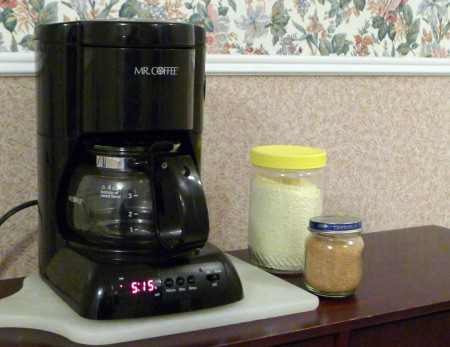 Our automatic coffeemaker is on a timer, and six cups of the stuff are waiting every morning at six. Still, I don’t like going downstairs first thing in the morning. The only amenity I’ve ever lusted after was a coffee bar in my bedroom. Yesterday we moved my $2 Goodwill coffeepot upstairs and stocked it with dried milk powder and raw sugar. I’ve finally joined the swanky set.

L. was our house-sitter for the months I was gone. He and his wife are pretty hard-core environmentalists. They’ve influenced me enough that, while I’m enjoying coffee in bed, I am also wondering about the electricity that second coffee pot is using.

L. showed up in mid-morning to paint. Before we could go, he wanted to show me something he’d bought with me in mind. It turned out to be a Vermont Castings Resolute woodstove. If you’re old enough to remember the Seventies, this was the Hippies’ dream stove, the one they couldn’t afford but all wanted. L.’s idea was to install it in my studio. 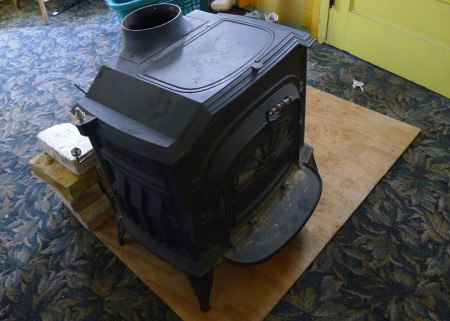 Here it is. The new kitchen stove.

This house is much smaller than our previous one, and we’re already having trouble finding places for everything. The Atlantic Kitchen Heater Model 121 is adorable and kitschy and in perfect shape, but it was never meant to heat a house. In the meantime, it’s starting to remind me of that old saw: “Every garden, no matter how small, should have room for a 20-acre woodlot.” In other words, it’s taking up prime real estate. 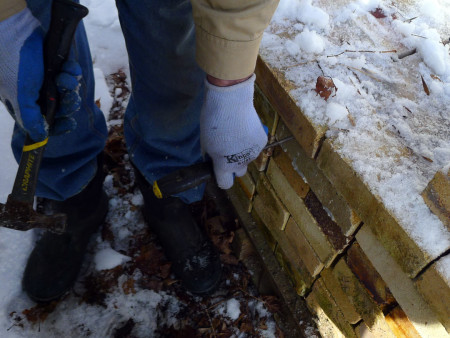 The firebricks were frozen together.

We drove to Camden to collect the Resolute. I stood in a snow pile with a measuring tape, speculating on how it might fit. Dithering, you might say. “Look, I lived in your house longer than you have,” L. finally said.

I’m not saying it was cold, but I set my water bottle on a snowpile and it turned into a slushie.

That is why we stopped on our way home from painting to pick up some firebricks. I hate to ask L. to drive down here two days in a row, but the spare stove is blocking the kitchen door. So this afternoon we’re planning on swapping them out. It’s hard to say what I’ll do with the other stove right now, but I can tell you that speculating in woodstoves—while vastly entertaining—cuts into one’s painting time.