I am out of small toned canvases, so I took a 9X12 with me to paint my quick sketch at Rockport harbor. It’s, well, sketchy, but I needed to be done by noon.

As I painted, I watched a man playing fetch with his dog, a tiny little ball of black fur named Moose. As I was packing up, the man stopped to chat. “I’ve painted that exact scene,” he said. I told him I will be teaching in Rockport as soon as I get my inventory put away.

“Where is your studio?” he asked.

“On Commercial Street, just past Pascal Avenue,” I said.

“Oh, are you from New York?” he asked. The Maine bush telegraph never ceases to amaze me. Turns out we’d met a few years ago when I was painting on Main Street in Camden. I was glad to reconnect, and I hope he gets in touch with me. 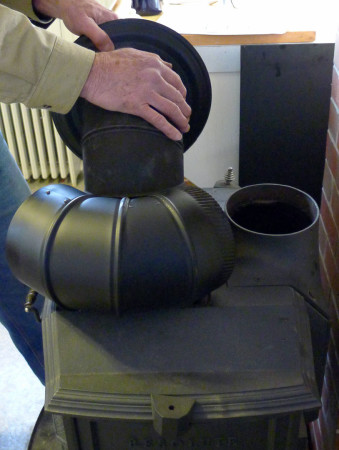 I told L. this isn’t how it went together.

I finished in time to collect the mail and get home before L. arrived to swap out our kitchen woodstoves. After helping, I think I could do it by myself, but only if I had a brawny assistant to do the lifting.

We ended up needing just one new part, a flexible stove pipe elbow. I asked L. where I could get one. Without hesitation, he answered, “Rankins, in Camden.” That’s weird, since he only lived here for six months and, as far as I know, never installed a woodstove.

The last time we needed a part for our insert firebox in Rochester, we ended up driving to Buffalo to get it. Even though upstate New York is one great hardwood forest, woodstoves are just not as popular there as here. I was thrilled to find the part so close to my house.

We lit it. It drew perfectly and the automatic damper sagged as it heated up, just as it’s supposed to do. L. got in his truck and headed north toward Stockton Springs. I sat down to finish my coffee, which had been cooling off since lunch. 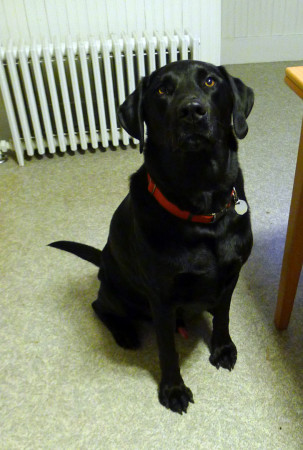 This is Harley. He came visiting today.

My husband called me from his office, saying, “There’s a stray dog in our backyard.” After watching him cavort around the house, we realized he was a hazard to himself and the drivers on Route 1. We put him in the mudroom, which he didn’t think much of. Within minutes he had opened the kitchen door with his nose, eaten my old dog’s dinner and gone exploring. 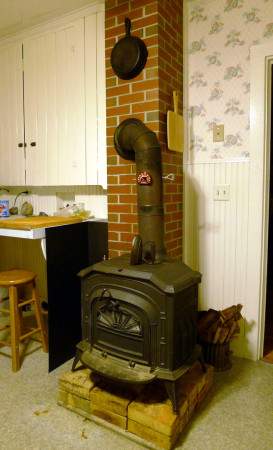 He was a nice fellow, but he was also a big, strong galoot. The two dogs rambled around the house until our guest realized it was dinnertime and he wanted to go home. “No dice,” I told him as he whined by the door. “You’re black and it’s dark out.”

Mercifully, his owner showed up shortly thereafter. He’d gotten my address from the Rockport police. It’s a nice thing when the emphasis is on reuniting dog and owner, rather than issuing a fine for it being loose.